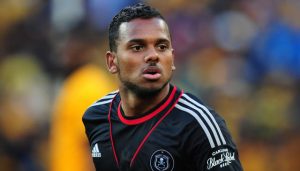 A South African footballer Kermit Romeo Erasmus acts as a striker for Orlando Pirates. He was born on 8 July 1990 in Port Elizabeth.

Kermit’s youth career passed at such clubs as Rangers (South Africa), Park United and Supersport United. In 2007, Erasmus earned the promotion to the senior side of Super sport. On 4 March 2008, Kermit scored his debut goal for the team in a game with Ajax Cape Town.

In 2008, a contract was penned with the Dutch club Feyenoord. In the summer 2009, Erasmus agreed on a temporary deal with Excelsior. He made a good start to life at new club scoring his debut goal during his first game for Excelsior. Altogether, he scored 12 goals in 30 games for the temporary squad.

On 10 July 2010, it became known that the striker would return to his former club Super sport United. After three years with the latter Erasmus completed a move to Orlando Pirates in August 2013.

On international level, Erasmus netted 10 goals in 15 matches for the South Africa national youth side at U-17 and U-20 level. Kermit’s national debut for the full side happened on 4 September 2010, when he took part in a game with Niger in the 2012 African Cup of Nations qualifier.