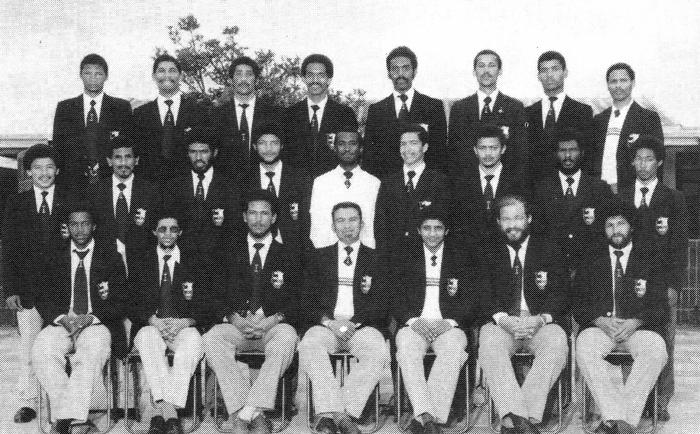 Dower’s association with the Eastern Province Rugby Union dates from the second half of the third decade of this century. Although accurate records have not been kept, it has been established that a Dower team won the E.P.R.U. second league trophy in 1932. Members of that victorious side were W. O’Connor, S. Sayster, P. Stuurman, A. Werner, C. Maclean, G. de Klerk, A. de Kok, G. September, C. wesso, R. Meiring, H. Williams, P. Prinsloo, G. Levack, W. van Vught, W. Lewis, W. Muller, A. Hufkie, P. Rogers and J. Pilcher. The team was coached by the then housemaster Mr W. Adriaanse.

The college teams experienced mixed fortunes during the period 1933-38, but in 1939 Dower once again be­came one of the leading clubs affiliated to the E.P.R.U. According to Mr W. Gardner, who captained the victori­ous side of 1940, Dower was still affiliated to the E.P.R.U. at the end of the fourth decade. Members of Mr Gardner’s team were: W. Gardner (captain), D. Moses (V/captain), H. Spanneberg, G. Sweetland, D. Smith, D. Murphy, W. Felix, D. Kivedo, E. Gardner, P. Geswindt, B. Hoffman, F. Landman, C. February, S. Kariem and A. Joseph.

The College club began the forties in the spirit that it had ended the thirties. The bonds with the E.P.R.U. were still as strong as ever. According to Mr F. Erasmus who joined the college staff in 1943, Dower played rugby of a high standard during this period. Mr Erasmus who coached the college during this period and later went on to captain a South African side, recalls that on one occassion no less than eleven Dower players were select­ed to represent an E.P. side. Along with Mr Erasmus players like J. Smith, S. Malgas, A. Gardner, V. Hoffman, S. Meyer and G. Groepe came to mind.

This exciting period came to an end with Uitenhage established its own Union in 1947. Dower affiliated to the new union, but maintained contact with the E.P.R.U. by playing friendly matches against E.P. teams. During these years Dower players who could have made the provincial side, played representative rugby for the Uitenhage Union. Thus players like F. Jenneker, W. Hector and D. Oliver had to wait until they had qualified before they could be selected to represent E.P., and Austin van Heerden for Central Karroo. After a few years as an indepen­dent Union Uitenhage re-affiliated to E.P. as a sub-union and Dower players again became eligible for selection to the E.P. team, but with the phasing out of the C.P.L. course for men, Dower could not produce the high stan­dard of former years. A revival started in 1965, however, when the college accepted men for the post-matric course. Thus, in the post-1965 period Y. Mentoor, R. Jonkers, H. Wolhuter, G. Levendal, M. van Wyk, A. Fray,

When Dower moved to P.E. in 1975, the college embarked upon a new era in Port Elizabeth. Because of the increased enrolment at the college, the club could draw members from a larger reservoir of talented players.

According to available statistics, the team had performed well with the first teams finishing in the top five on eight occassions and in the top seven on four occassions. The college normally found it difficult to reach the very top bracket, because many of the players have to leave P.E. during the vacations.

The period 1975 to the present has, however, not been short of talented players. Players of the calibre of Allister Coetzee, Desmond Kramer and Anton Arendse is remembered with pride by staff and students of Dower. Along with the aforementioned, the following players have earned places in the representative sides of the E.PR.U.: J. Mitchell, F. Sysaar, G. Gamiet, G. Symons, J. Howard, K. Persendt, P. Jacobs, J. van der Linde, J. Klaasen, A. January, B. Petersen, P. Smith, V. Raubenheimer, L. van Jaarsveld, A. Fritz. N. Langeveld, J.Prins, D. Uren, B. Koeberg, R. Young, I. Salie, C. Arendse and R. Rossouw. One of the memorable moments of the eighties for Dower was Japie Klaasen’s last minute match winning try against Glen Roses in the 1980 Knock-Out Final.

The best team of the recent past, must certainly be the team of 1983. They won the intercollege Tournament in Kimberley in convincing style. Special mention must be made of Mr P. de Silva as coach and Mr Japie v.d. Linde (Mr Van) as a player and administrator. The same team reached the League final for the first time the same year when they were narrowly beaten by Glen Roses.

It has not been possible to obtain detailed information in respect of all the players and administrators who have contributed to the development of the game at Dower in the E.P.R.U. fold, but the college is proud of all of them. The successes, fortunes and achievements of those who continued as players and administrators all over the country have been followed and are still being followed with interest by Dowerians.