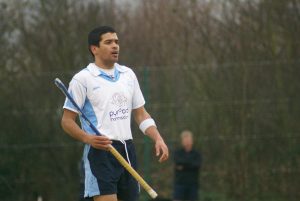 Denzil Dolley (born 22 July 1977 in Port Elizabeth, Eastern Cape) is a field hockey player from South Africa, who was a member of the national squad that finished tenth at the 2004 Summer Olympics in Athens. He played for the University of Port Elizabeth and a provincial team called KwaZulu Natal Raiders. He has previously played for Holcombe Hockey Club – based in Rochester, Kent – in the UK National League, as well as coaching Sanderstead Hockey Club. He is now the 1st XI player/coach at Woking Hockey Club -based in Surrey.