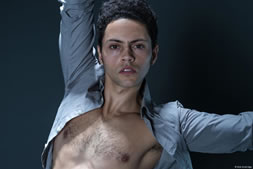 Dane Hurst was born in Port Elizabeth and spent his formative years in Gelvandale. He joined the Rambert School of Ballet and Contemporary Dance in London, England in 2003 supported by the Linbury and Ernest Oppenheimer Memorial Trust Funds and later joined Rambert Dance Company as the first      recipient of the Sally Gilmour memorial trust bursary in 2004. Dane was nominated for ‘Best Emerging Dancer’ of the year in 2006 and in 2007 received the ‘Spotlight Dancer’ of the Year Award by the Critic’s Circle National Dance Awards,U.K.

He has travelled nationally and internationally having made guest appearances with Rambert Dance Company, Phoenix Dance Theatre, National Dance Company of Wales, Mad Dogs Dance Theatre and Company Wayne McGregor. He was voted 3rd in Dance Europe Magazine’s Top 100 Dancers of the Year 2012, as voted for by an international jury of dance writers and critics. In 2013 he was nominated for Outstanding Modern Performance and in 2014 received the Best Male Dancer of the Year award by the Critic’s Circle National Dance Awards, U.K. In 2016 Dane set out to share his skills with youth from disadvantaged areas and created the Moving Assembly Project to provide access to high quality training and performance. The project teamed up and partnered with existing organisations and has since travelled to Brazil, Rwanda and South Africa in its founding year.

Dane is currently an independent Dancer, Choreographer and Founder of Artistic Director of the Moving Assembly Project – www.movingassemblyproject.org