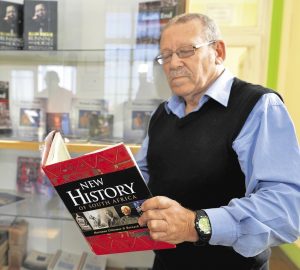 Cecil Colin Abrahams, retired ex-Principal of Bertram High School in the Bethelsdorp area since 2001 the Administrator of the South End Museum, In Port Elizabeth is a former victim of the group Areas Act: like so many others experienced the trauma of forced removals from a North End home to one in Salt Lake in 1968. Ever since that calamitous time Cecil has remained a Northern Area resident – a period of more than 45 years. He experienced the events of August 1990 first hand: the uprooting of families from their homes, and the causes thereof, therefore constitutes the core theme of this book.

Cecil has special interest in researching heritage issues and has written a number of newspaper articles relating to such matters while working at the South end Museum. In addition, research for his Master’s Degree in Education, completed in 1985, was based on the study of “A pedagogical evaluation of the role played by, inter alia, various churches in the education of the Coloured child in the PE area, 1803 – 1940”. The thesis is housed in the Nelson Mandela Metropolitan University Library.

He has also played a significant role in the sphere of sports in the Metro, having served the Eastern Province Sports Council as General Secretary for 15 years.