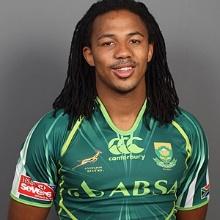 Born and raised in Port Elizabeth, Cecil first burst onto the local scene at U12 Level where he represented the Eastern Province in a youth week tournament. He was offered a chance to attend the specialized Harmony Sports Academy in Grade 10, where he flourished on and off the field, representing the Northern Free State Griffons at the 2004 & 2005 Grant Khomo U16 Weeks and the 2006 Coca-Cola Craven Week. Cecil has since gone on to play for the Emerging Springbok Sevens, the South Africa U20s and he has been a regular figure for the Springbok Sevens squad over the past two seasons. He finished the 2010/2011 HSBC World Sevens Series as both the top try-scorer and the overall top points-scorer of the season and this is despite suffering a broken jaw in the George tournament in December 2010. He has inspired young players all over the world –his YouTube Season highlights package having already attracted more than 17000 views. With him being nominated for the 2010/2011 Sevens Player of the year, he is a brilliant example of how Greatness Beckoned for a dedicated young superstar. He was part of the Olympic sevens team that won a Bronze medal for South Africa.